I'm the kind of person who thinks its a great idea to keep a diary. I'll spend ages choosing the right diary and zealously write several really long entries every day for the first few days. For the next few days after that I might write the occasional short post when I remember or have nothing better to do. After that the diary will get forgotten and eventually thrown away several years later when I have a sort-out.

The way I see it, a blog is just a public, virtual version of a diary. This is not the first blog I have started. The others have all gone the same way as all those diaries.

So you can imagine how surprised (and proud) I was to realise that this would be my 100th post! That's right, this blog is now 1 1/2 years old and 100 posts long!


To celebrate I thought it might be fun(ny) to look back at the journey we've taken so far:

My very first post was about where to buy beading supplies. It was aimed at the hobbyist beader because that's what I was at the time. Most of the pictures, which I included off the internet, aren't even there anymore. 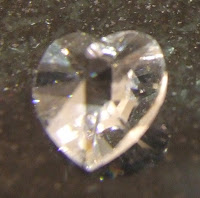 I started very early on featuring jewelry I love from other shops and artists and I posted some truly dreadful photos. This one I'm pretty sure is the worst!

I started planning my wedding and talked about my wedding ring (that I had to get made to fit with my engagement ring) and the jewelry I made for myself, bridesmaids and mum.


Eventually I recognised my love of copper and dedicated a whole post to it. I also showed you my workspace. I have no idea how I ever coped with a space that tiny... I still haven't shown you my space now but it's on my list, don't worry. It's about 3 times the size of the old one and is still feeling too small!

I started sharing the skills I had learned (once I had learned a few) with this post about photography and this (until recently my most popular post) tutorial on making a necklace stand.

In June 2010 I made my first Etsy treasury and posted what could be considered a prototype for the 'Inspiration' posts I currently make. June 2010 was really the turning point as far as my jewelry is concerned as it was then that I bought a hammer and started discovering the amazing things you could do with metal. It wasn't long before I dropped beads almost completely.

In September-December I went to Bootcamp and learned a lot about improving my Etsy store but eventually that went the way of the diary!

By January 2011 I had found my niche and the blog has remained similar since then. Hopefully still improving all the time but no crazy changes.

Let me know if you find anything interesting, share it with us in the comments :)
Posted by Claire at 17:52

Email ThisBlogThis!Share to TwitterShare to FacebookShare to Pinterest
Labels: Behind the Scenes, Musings