My quest to find a wedding ring

Back in May 2009 my boyfriend proposed to me with a beautiful and interesting solitaire ring.Whilst it wasn't what I had imagined when dreaming up engagement rings, it was far nicer than what I had thought I wanted :) 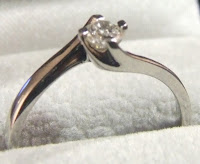 Unfortunately, when I started looking for a wedding band to go with it, I began to question my love of the ring. Next to a straight, traditional wedding band it sits completely wonky so I started the hunt for a shaped band that would fit next to it.

Pretty soon it became clear that stores simply don't have rings the right shape, despite many of them selling engagement rings a similar shape to mine. The closest I found was this curved ring... > 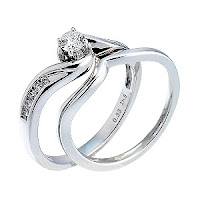 ...until I found the exact right shape in H. Samuel in Shrewsbury in England, only to be told that the ring was only for sale alongside their matching engagement ring. I asked to try it on anyway and found that the ring was actually the mirror image of the shape I needed anyway.

I started searching on the internet and found several candidates from Serendipity Diamonds, Churchgate Jewellers, Element Jewellery, Danforth Diamond and weddingrings-direct.com. The problem was I couldn't try them on to see how well they fitted against my ring so I was reluctant to go for it and continued my search in shops.


Eventually, after hearing from jeweler after jeweler that I would have to get one made, I decided it was either a mail order ring or a custom made one. I was all set to get one off the internet until my fiance said that he thought I should spend the extra to get one made that would be a perfect match. So, after getting some recommendations, we went to Union Street Goldsmith in San Francisco and got them to make a custom ring.
After only a week they called to say the ring was ready so I picked it up today and here it is! 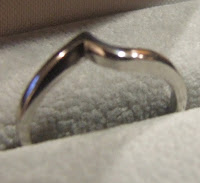 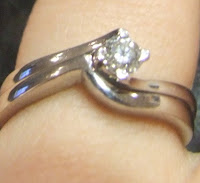 Its absolutely perfect, exactly what I was looking for and I'm so glad I've finally found it after all that searching!

Guys... be warned; either buy a normal shaped engagement ring or buy the wedding ring as a set along with it!


While we are on the subject of engagement rings...
Whilst browsing pictures of rings I came across this 2 karat ring which I felt I needed to share with you...