You know those Wedgewood beads I mentioned the other day? Well they aren't actually the first unique supplies I've been given. 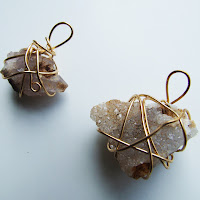 I got these cute little chunks of rock from my friend Abby after I looked after her cat while they were away.

She brought them back for me from Seattle and said she thought I might be able to make something with them - how exciting! They have a very faint tinge of pink to them and I assume they're some kind of quartz. 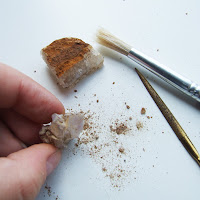 They came simply wrapped in that gold-coloured wire but I decided it just wasn't going to be enough of a challenge if I kept them like that.

So I took off the wire and cleaned out the dirt from all the cracks and crevices...

... and then they sat on my desk for months while I waited for inspiration to hit. I started making something with them occasionally but each time would end up dismantling the project.

Of course, eventually, inspiration did hit. I started with the smaller piece and took advantage of its rough surface to create a wiggly wrap around the top and a loop so I could suspend it. I had a long piece of brass chain waiting for a home so I added 2 tiny rose quartz nuggets and turned it into a really long pendant. 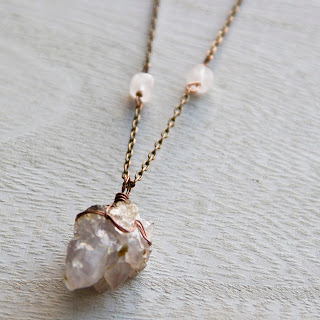 I tried to make a ring with the larger piece but it was just too big, it looked ridiculous and kept trying to turn around on my finger. Eventually I took a risk and decided to attempt to make the piece smaller. I put the rock on my steel bench block and whacked it with a hammer whilst praying I wouldn't end up with rubble all over the room! 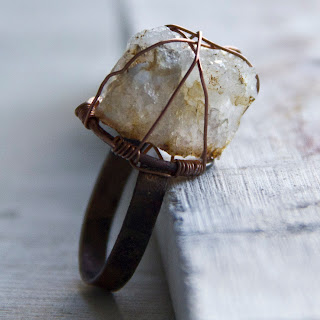 It worked, though, I ended up with about 3 smaller pieces (and lots of crumbs). I took the largest piece and tried again to make a ring - much better. It's still quite a large ring, so for parties only but not on the ridiculous scale of the first version!

I still haven't done anything with the final 2 pieces, I'll have to wait for more inspiration before I work on those. I'll let you know when I do :)
Posted by Claire at 13:19