I have often toyed with the idea of writing a fantasy fiction novel. I have even gone so far as to write the start of several or random scenes from the middle. My problem is that I lack the patience to sit down and plan out the whole story from start to finish, to create several characters, to work out how their stories interact and to fill in all the little details that bring them, and the story, to life.

It was while I was idly pondering how I could get myself to take the time to map out a framework in order to at least make a decent attempt this time around that I realised I was being silly. I don't need to create stories because I already create jewelry. The creative outlet is already there, I just need to channel more aspects of my creativity into it. Crafting items fits my "scene" approach far better than trying to craft an extended story anyway.
So, in order for my items to be little pieces of story as well as pieces of decoration, I want to take a different approach to designing them. Rather than making sketches of shapes which are pleasing to look at and working from there I want to start with a theme and inspiration of some kind. I plan to share these with you, along with the whole process of designing and crafting the item and sharing its story.
Since Valentines day is the next big event coming up it seemed like the perfect place to start. Valentines day has grown to represent so much these days I decided to focus specifically on the motive behind it - love. I started by looking into the different symbolism around love. Many cultures have a deity of love, usually a woman, though many also have a deity of lust which is more likely to be male.
Several deities stood out as having specific features which might be useful inspiration. Egyptian Gods tended to overlap in their roles a lot but Hathor was the Goddess of love, beauty, music and motherhood. She is often represented with horns or as a cow, possibly representing fertility.
Turan, an Etruscan Goddess, and Anteros, a Greek God both share the trait of being winged, alongside the more famous Cupid. Turan was also associated with the dove, goose and swan. The dove mates for life and it was often thought that February 14th was the day on which birds chose their mate. Doves are also linked with love in Roman, Jewish and Hindu cultures. The swan is associated with love in Celtic and Christian lore, as well as being linked with Aphrodite and Zeus in his seduction of a beautiful mortal queen.

Apples are often used to represent love and fertility and are often seen in legend given as gifts from one lover to another. Rosemary has long been seen as a symbol of fidelity and Jasmine is a Hindu flower of love.
Celtic legend has it that the harp is the bridge of love between heaven and earth and many cultures, including Christianity, have love stories involving the harp.


I also made an Etsy treasury based around a search for the word "love". I tried to avoid including hearts but a few I just couldn't resist! Hearts have always been a symbol of love because love is said to be felt in a person's heart in many cultures. Keys are less widely seen but signify giving someone the key to your heart. 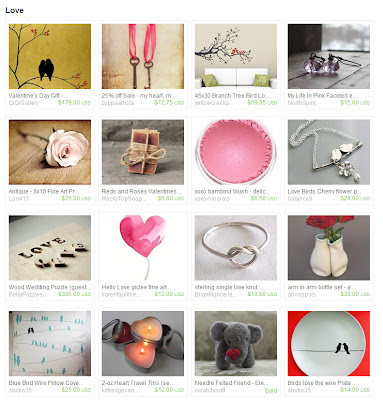 Birds, particularly 2 together, is a common theme here too. Pink and red are often used to represent love, red particularly is used to express strong emotions. Roses have been associated with love since Greek mythology linked them with Aphrodite. Rings are used to symbolise an eternity spent with someone, as they have neither beginning nor end, and knots are also often used to represent the bond between 2 people. The elephant was just so cute I had to include him!
Check back soon to see my initial ideas based around this inspiration and let me know in the comments if you found inspiration from this post too!
Posted by Claire at 15:18