I was very excited to have recently completed and delivered my first custom order for wedding jewelry! The bride is an ex-colleague and friend of mine who is getting married in February.

She described her sparkly snow based theme to me and showed me pictures of her dress, her bridesmaids dresses and jewelry that she likes. We talked about what style of jewelry would fit her theme best and decided fairly quickly that beaded, swarovski crystal pieces were the obvious choice. Her colour scheme is going to be brown and pale blue with lots of sparkles so we chose 3 shades of swarovski beads to fit - crystal, light sapphire and sapphire. 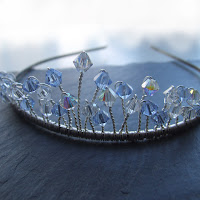 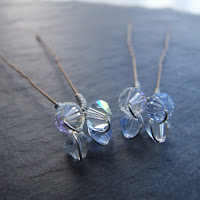 I started off with the tiara, as this will be the focal piece, and let it serve as inspiration for the other pieces. This is a simple design using bicone beads with each bead on its own 'stalk', angled to produce a random, cluster effect and getting taller towards the centre.

The bride also wanted some sparkle which would be seen from the back so I also created several crystal cluster hairpins which can be added into the hairstyle. 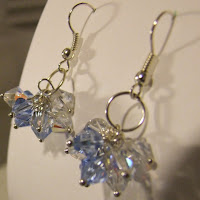 One of the pieces of jewelry the bride particularly liked were the cluster earrings I made for my own wedding so I decided to use the exact same design. This reinforced the crystal cluster theme and set the tone for the design of all the other pieces.

With the tiara and earrings both creating such a striking effect I wanted to keep the bracelet and necklace more simple and delicate whilst still carry on the crystal cluster look.

The necklace features several dangling clusters of beads, gradually getting smaller the farther from the centre they get. The bracelet's clusters contain 5 bicone beads which are connected into the chain. 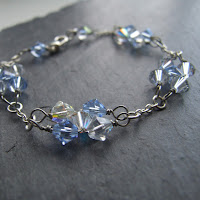 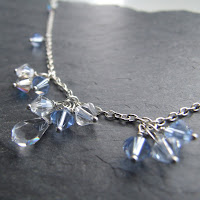 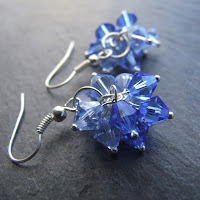 The bridemaids' jewelry obviously had to match the bride's whilst being more understated. The maids are wearing brown dresses with blue sashes so I used the darker shades of bead so the colour would stand out more.

The earrings I kept the same as the bride's but using the darker colours.

Obviously the maids aren't wearing tiaras too so I created cluster combs which can be used in variety of hairstyles. 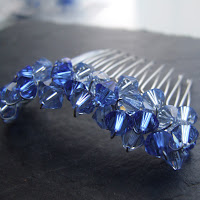 Finally their necklaces and bracelets are a very very simple design. Both very similar to one another as well, the necklace features 2 beads per section as opposed to 1 but the sections of chain in between are much larger. Unlike the bride's necklace these will sit around the neck rather than pulling into a v-shape. 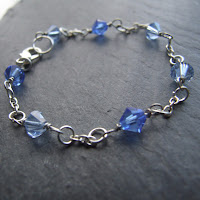 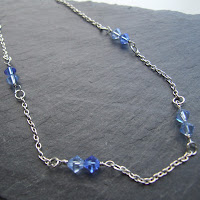 Overall I'm really pleased with how these turned out and how well they work together as a set. I also hope than many of these pieces are versatile enough to be worn again for other occasions. I was very excited to finally give it to the bride as she had only seen pictures until that point. I'm pretty sure she liked it as she said "It's fantastic, so much better in reality than I imagined or the photos". Success! :)
Posted by Claire at 21:04