When I first started making jewelry as an idle summer hobby, wire was simply a convenient way to connect the beads to the ear wires. Almost exactly a year ago I bought a hammer and a bench block and started to discover that wire could be so much more. That was really a major turning point in my jewelry designs as I began to explore the beauty of metal in different shapes and with different textures.

Since then I have continued to expand my tool collection and this has given me the ability to create a wider and wider variety of designs but none so significant as my latest purchase.

Given my obsession with the natural beauty of metal it was only a matter of time before I looked into sheet metal. Wire is great and you can do a lot with it, especially if you start using multiple gauges, but there are so many more possibilities with whole sheets of the stuff!

Of course I've always known it was available but my 'studio' setup is rather limited and I didn't think I would be able to get the necessary tools for it. My workbench has drawers in so it's not possible to attach a clamp to it and without that it would be almost impossible to saw out any shapes from the metal. Did I mention its also in my bedroom? I don't think metal sawdust is a good thing to have floating around your bedroom!

Then I found these from Fusion Beads! I really thought they were too good to be true. Surely they couldn't be strong enough to cut through metal - they're only scissors. Maybe they only work for someone who regularly lifts weights with their fingers.

Anyway, I decided they were probably worth trying out so I bought a pair and several sheets of copper. 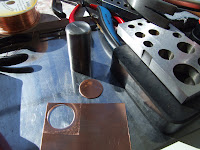 But I didn't stop there. I also found a disc cutter to easily cut out circles from my sheets of copper and promptly ordered one of those too! It arrived this week and of course I punched a circle straight away... 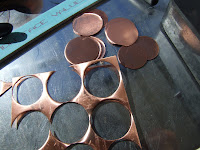 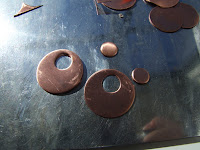 ...and then I punched circles out of circles!

It was really tough to cut out the discs, I had to get our actual proper DIY hammer because my jewelry one just wasn't tough enough and even then I had to hammer really hard. I moved the cutter onto the floor so the carpet would absorb most of the noise!
It was fun though and I have so many designs in my head for all these different sizes of circle.

I actually bought another gadget as well - a dapping block. I can use it to make my circles into little dome shapes - very cool :)

I have a few completed designs already and a few that I'm still working on. I'm very excited to post them up here and show you so look out for them in the next few days!
Posted by Claire at 17:29